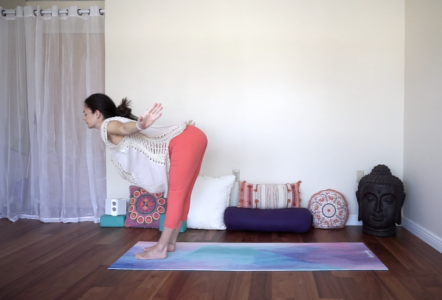 Hip flexors get a lot of attention in yoga classes, and rightfully so. But why is it so important to work with them?

Before we go there, let’s square away exactly what we’re talking about.

What are the hip flexors?

The hip flexors are the muscles that run across the front of your hip, connecting your torso and your thighs. They help you to do exactly as they claim: flex the hip!

So is bending forward at your hips. And crawling. And squatting. And sitting in an elevated L.

There are major three hip flexors on each side:

You actually have six more muscles that act to flex the hip, but these three here are the heavy lifters, each playing a subtly different role and participating in hip flexion to a more or less effective degree.

Why do the hip flexors get tight?

They get tight because they work for you essentially all day long. Have you done any of these things today (or lately)?

And if you’re an athlete, a yogi, or a handstand lover, you’re firing the hip flexors big time to:

In fact, it’s so easy to overuse the hip flexors that they can be a chronic source of discomfort, leading not just to tight hips but potentially to backaches.

What’s up with the psoas?

Oh, the mystical psoas. This muscle gets a lot of attention because it has potentially big implications for whole-picture well-being. It’s even become popular in certain yoga circles to refer to it as “the seat of the soul,” the idea being that if the psoas is distressed, so are YOU. And if the psoas is happy and free… well, you get it. NeuroKinetic Therapy teacher Jory Serota has a funny article over at Elephant Journal arguing that the psoas is not the “muscle of your f*ing soul.” He points out that a lot of psoas dysfunction is actually weakness and not always tightness. In these cases, learning to activate the muscle appropriately is the body medicine that’s needed, NOT more stretching. Worth a read.

Whether or not it’s got anything to do with your soul, there are a few reasons to pay attention to this muscle in particular:

Why being deep matters.

The psoas & sitting — a recipe for ouch.

Stretching the Hip Flexors with Yoga

Since daily life presents us with many opportunities to fire and shorten the hip flexors (with hip flexion), yoga’s best contribution can be the many ways in which it helps us to extend the hips. (Don’t get me wrong, you can most certainly also strengthen this muscle set with yoga asana if that is your goal.)

Following are some of the yoga poses in which the hip flexors are being lengthened:

I have witnessed many students experience relief and transformation on the mat when they’ve mindfully and successfully tended to the opening of their hip flexors. It is often as if there was some stagnation that was simply waiting for a door to be opened in the body, or a valve to be released. What starts off feeling like limitation can be transmuted into joy and freedom. Such, of course, is the power of yoga. It’s not always clinical. Not always black and white. But it is most certainly potent medicine for the whole being.

I have a couple of classes dedicated to opening the hip flexors — a free 30-minute class on YouTube and an hour-long class on my membership site. If you’re anything like me, freeing this angle of the body feels absolutely divine. As always, go only so deep as feels AMAZING.