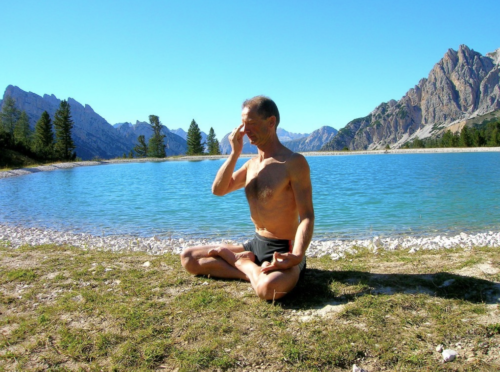 Across yogic lineages breath is central to the practice. We reach and lean, twist, and fold, but without attention to breath, which facilitates access to complete presence, we are merely performing aerobics.

Famously, Buddhist monk Thich Nhat Hanh recommends repeating this as a way to arrive in the present moment:

I am breathing in.

Now I am breathing out.

He says, Say it to yourself. Think only this!

I am breathing in.

Now I am breathing out.

Breath, according to yoga and science

But what is breath and why is it important? Breath, the yogis say, is life-force. It is vitality itself.

Science might say, No, that is not right. Breath is the intake of oxygen, the expelling of CO2. It is made possible by a drawing down of the diaphragm’s central tendon. The yogis do not disagree, but they know that breath is also something more than matter and molecules shifting in and out.

The Sanskrit word prana is often translated as “breath,” but the translation is incomplete because prana refers to something far more complex. It is that which makes life possible. It is the force that underlies life. Desikachar takes this all a step further calling prana, “that which is infinitely everywhere.”

Prana is the great inanimate animator. It’s like the electric current encased in a bulb. Wipe the bulb clean and the light shines brighter. Shatter the glass altogether, and the light extends farther than it could before.

Our layers of ignorance–our faulty ideas about ourselves, our limiting beliefs, our pride and our ego–make up the smudged bulb that needs cleaning. Learn to shatter your illusions entirely, and burn brighter than you ever have.

It’s no mistake that the readiest metaphors for prana have to do with illumination. After all, according to the old texts, the purpose of a yoga practice is, ultimately, to reach Samadhi, which means Liberation or Enlightenment. Yoga is the process of clearing away the obstacles to Liberation. It’s the process of shedding one’s karmic baggage in order that we might see Reality for what it really is: connectedness, bliss, and unhindered illumination.