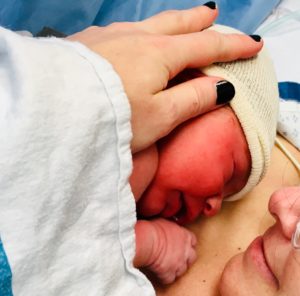 I’m writing on a personal note today to share the story of how my little family came to be. It’s not a yogini’s mystical tale of a birth so magical it bordered on orgasmic. It’s not even what you might call a “positive birth story,” except that, in the end, my baby landed on my chest healthy and oh-so-loved — so in that way, it’s positive beyond measure.

I share because the experience required that I put my yoga into practice. Without it, the journey would have been a lot tougher to process.

The “PLAN” was to have an all-natural home birth tended to by my midwife and my partner Joe using hypnobirthing techniques and a birthing tub. I use the term “plan” loosely because I have lived long enough to know that the Universe chuckles at plans. All along, I kept saying, “I plan to have the baby at home — if that’s how it works out.”

One or two people noticed that I’d been qualifying the statement and thought it was maybe a little cynical. “You’re so healthy.” “You’re in such good shape.” “You’ll have exactly the birth you envision….” were sentiments I was hearing regularly. Deep down, though, I knew that doing yoga has absolutely nothing to do with the way a labor will progress. Sure, it has the potential to keep you in great shape (not just physically of course, but mentally/emotionally. Some would go so far as to say karmically) before and after the labor. And yet… some things are entirely out of our (rad mudra-holding) hands.

Anyhow, the plan was to have an all-natural birth at home. Some time in the third trimester, though, my midwife and I realized that baby was reclining in what’s called the occiput posterior position AKA “sunnyside up.” It’s not the ideal positioning because it prevents babe from tucking his chin in the birth canal and presenting the smallest part of his skull first.

While it is definitely possible to have a vaginal birth with baby in the posterior position (and many have successfully with no complications), the position is notorious for causing back labor, which can be excruciating beyond the usual intensity of labor and delivery.

Given the positioning, my midwife, who is a strong advocate for drug-free and intervention-free birth, actually recommended that I labor within reach of an epidural. Stubbornly, I didn’t take her up on it, instead persisting with my plan to labor at home.

For months, I did all of the “spinning babies” techniques I could find on the internet, diligently giving my little one as many opportunities as I could to spin around to the optimal position. To no avail.

I finally went into labor on a Saturday night. Contractions, or surges, in the language of hypnobirthing, began manageably enough and allowed me to fall asleep between them. I thought it wise to let Joe keep sleeping, thinking that this could be one of the last long slumbers he’d get in a while.

On Sunday, instead of growing in intensity the surges grew farther apart. Then late Sunday night, they came back full force about every 7 minutes, more powerful than the first night. Sleep was nowhere near as sound as it had been the night before.

An Exercise in Releasing Expectation

Fast forward to late Tuesday night, after three+ nights of halting labor. This night’s contractions were the strongest yet and closest together. Both Joe and I were beyond fatigued and a little fearful that the labor wasn’t progressing in the usual fashion. The midwife had even called the labor “dysfunctional,” not a dis from her but an honest assessment.

The turning point, eventually, was when labor became full-on back labor without relief between contractions. As you mommas out there well know, active labor can (and everyone’s experience is different) feel like your pelvis is being pulled apart. My experience was that my pelvis was being pulled apart and that my sacrum was being torn from my body. I might have managed if the pain had gone away for little moments in between surges, but that’s not what was happening. The intensity just wouldn’t relent, and I had few energetic reserves remaining.

All my life, I’ve felt this internal barefoot, mystical, earth-lovin’ natural mama vibe that feels right and true and authentic to my core. My own mama had five children vaginally and drug-free, and I suppose part of me assumed that that’s what would happen for me.

In the end, now Wednesday morning, I phoned my midwife for guidance. She advised that I meet her at the hospital. It turned out, baby’s heart rate was dropping dangerously low with each contraction because the cord was wrapped around his leg. Little boo hadn’t been able to descend deep enough into the birth canal despite my dilating — in part because of the cord, in part because of positioning. The doc team, along with my midwife, recommended cesarean section, the last words I wanted to hear.

Seeing the look of genuine concern and fear on the nurses’ and my midwife’s faces with each heart deceleration made the decision a no-brainer for Joe and me though. We wanted our baby to be born alive and healthy.

For a brief moment, while my midwife held my hand, I had a sob. Despite having been open to the idea that things could take a thousand different directions, I had taken a vaginal delivery for granted and needed to mourn the loss of that reality. I swiftly saw that I’d been harboring a vague impression that c-sections were somehow less earth mama than vaginal deliveries. This wasn’t a conscious impression but a culturally gifted subliminal program that had been embedded into my conditioning. It was time to let it go.

So– they wheeled me in, performed one of the most common surgeries in the country, and within minutes placed my 8lb 8oz, hairy headed, hungry, beautiful little baby boy on my chest. He promptly found my nipple, has barely let go since, and is precious to me beyond all expectation.

The manner and method of my son’s birth weren’t what I would have written for us. But not having the ideal birth story to relate is a miniscule price to pay for the life-altering joy of gazing at him and holding him, alive, fierce, delicate, dynamic, vulnerable, vital, potent little being that he is.

Today I write while Jovian sleeps, 3 weeks old. I look over at him every minute on the minute to make sure he’s still breathing. The immensity of this love feels out of body. I’d even call it mystical.

Moms, I’d love to hear a nugget from your story. Anyone out there have a posterior birth? Or a birth that made you shift your expectations? Or a birth that went exactly according to plan? Do share!

Grateful for you all. Cheers to you and be well.