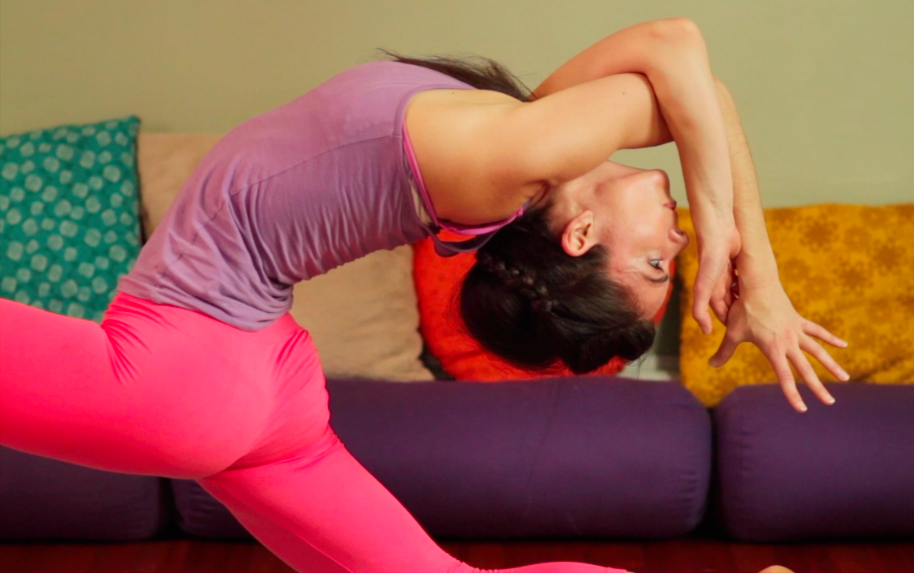 I do a lot of thinking about ecstasy. I suppose that’s because it was a singular experience of it during a yoga practice — bursting through my pores, practically palpable, and unleashed like a river — that first connected me to a feeling of having come home to my life’s purpose. I have had similar feelings of connection to something greater when in communion with a lover, but this had a unique potency. It happened solo, and yet somehow I did not feel alone.

Yogis talk a lot about prana and pranashakti, the life force, or (I love this, from Desikachar:) “that which is infinitely everywhere.” Not unlike in Chinese medicine wherein the aim is to unblock channels in order to free up qi, yoga poses free up nadis and clear stagnant energy in order to allow for free passage of the life force, which exists both inside and outside the physical body.

I would have thought this was all a load of yoga hocus pocus except that I began fairly early on in my yoga journey to experience it firsthand. These primary experiences of ecstatic connection were so powerful that they illuminated my life’s calling like a newspaper headline: BE A GUIDE FOR OTHERS WHO WISH TO CLEAR THEIR PATH TOWARD ECSTASY. Boom. Bam. Dharma wanted me, and I was ready to answer.

It may not be that glamorous a story but it’s what happened. I was trudging along through a home practice, a little finicky about where to go next, doubting my ability to lead myself that day, nearly ready to turn on a yoga video instead. I was experimenting with variations of traditional poses and feeling a little guilty about it. Who am I to throw textbook alignment out the window? Wouldn’t so & so [insert any one of my teachers at the time] correct me if I did this in class?  I was loving Reverse Warrior, which I had just begun referring to as Peaceful Warrior and Shanti Warrior because the sentiment felt so much better. I was marveling at what a powerful heart opener it could be, and I began crafting ways to liberate my heart space even more. With that in mind, I threw my right arm above my head, bending my elbow, then wrapped my left arm behind my back and grabbed gomukhasana arms. Bam! Ecstatic flood.

It was as though all the crankiness, stuffiness, and accumulated residue of a lifetime’s minor resentments had sloughed themselves off of my outer, upper ribs and fallen to the floor scattering into a billion innocuous particles which would someday reassemble into sunnier humanoid tones.

I had been practicing handstand with all the fanaticism of an addict. I used every opportunity I could to kick my legs above my head, so much so that I had begun avoiding classes and teachers I believed might stifle my inverting. It was a boon to my home practice, and I was enjoying the journey: staying as present as I could; laughing at my misses; trying to temper any latent competitiveness; and generally tending to all of the things that I believed would make my goal of sticking a handstand “yogic.” Still, I unabashedly fed my desire to hold a solid upside-down tree. I had been doing a lot of thinking about abhyasa, the recommendation to practice consistently and devotedly, and — even though my doubting self called to mind all of the people who might think that what I was attempting was somehow unyogic or too demonstrative and physical — a greater part of me wanted to celebrate the gift of embodiment, to figure out what this mysterious and magical body was capable of.

One Sunday night I took a class at my own studio. It was a sweet, open-level class, and the teacher cued an opportunity for a freestyle Vinyasa. I literally leaped at the chance to get upside down, and I will never forget what happened next. As I took a controlled but not-quite-strong-enough kick toward handstand, I became aware of a distinct force, above me and surrounding me, which was suddenly then assisting me. I am fully aware of how superstitious this sounds, but it felt like the atmosphere had reconfigured at a molecular level, shaping itself into a hand that pulled my heavy leg up above me and stabilized me for a gloriously long few rounds of in and out breath. It was my first real “sticking” of handstand and it felt like I had not been solely responsible.

I am finding portals to the ecstatic all the time. It can be the simplest things that open the floodgates: a passage from a favorite text; sun or wind on my face; a danceable House beat; a touch from my Love; the rise and fall of my step-kiddos’ chests as they sleep. The experiences are more than just of pleasure, they’re powerful enough to be unsettling, transformative. As when all colors come together the result is white; when all emotions/feelings/experiences merge, the result is overwhelming intimacy with Being. The experience of ecstasy is nowhere near constant for me, but I am becoming aware of more windows that let the light in.

My life’s work is to keep sloughing off the layers that stand between me and ecstatic knowing and in the meantime to share everything I have come to know with anyone who comes to me hungry for the same experience.

What experiences of ecstasy have shifted your life?